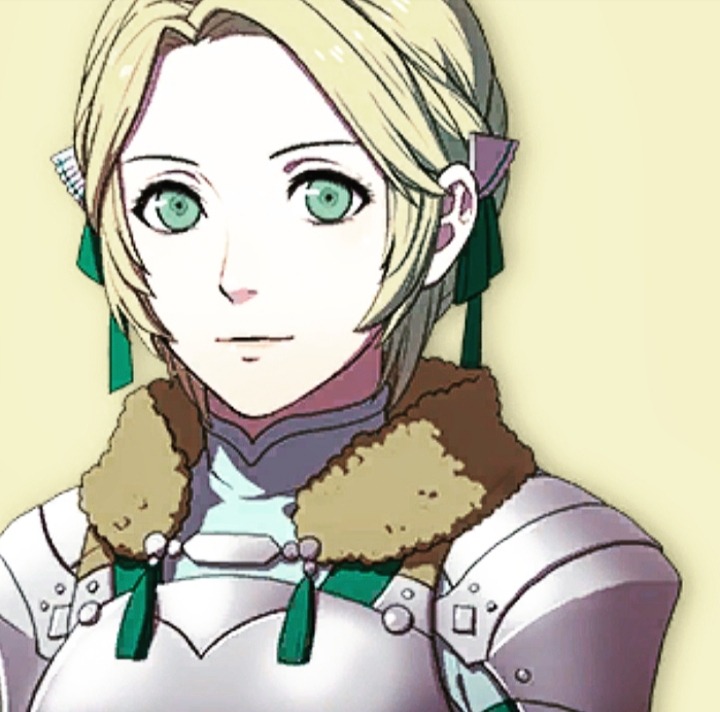 Name
Ingrid Brandl Galatea
Birthday
4th of the Guardian Moon
Position
Student, Black Eagles
Black Eagle Strike Force
Profile
Ingrid is the daughter of Count Galatea and a childhood friend of Dimitri, Felix, and Sylvain. Ingrid was engaged from birth to Glenn of House Fraldarius, and they were in the way to actually fall in love, but her fiance was killed during the Tragedy of Duscur when she was 13 years old. This event caused her to hold a grudge towards the people of Duscur to this day.

Despite her noble birth, her family has fallen on hard times because their lands are poor and unsuited for agriculture. Ingrid has a tremendous amount of pressure to marry by her family as she is the sole child to inherit a Crest.
Personality
Ingrid aspires to be an ideal knight which is reflected in her principled and industrious nature. Dimitri himself claims that "she is more knightly than most knights." She is hardworking and is constantly training herself to become an ideal knight and would rather be on the front lines of battle than be a housewife. She is unfamiliar with more domestic pursuits such as using make-up, but is a decent cook. Despite her overall seriousness and no-nonsense attitude, she will often lose herself when in the presence of delicious food.

As the heir of House Galatea, Ingrid's father desperately wants her to marry in order to preserve the house's future. While she is exasperated by his insistence and wants to be rid of the burden in pursuit of her own dreams, she is nonetheless grateful to her father who took care of her at his own personal expense, giving her anything she wanted and needed while depriving himself of even the modest basics of living and meals. The two seem to have a good relationship otherwise as she is more than willing to at least consider any potential marriage prospects and he likewise will cutoff any connections should they harm her well-being, no matter how considerable of a dowry he would receive.

She likes tales of chivalry but dislikes extravagance.
THEME